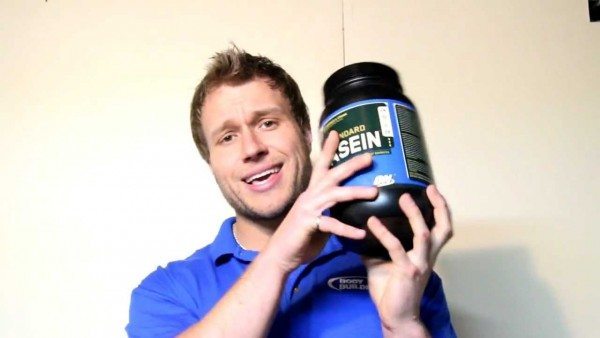 Protein supplements are a fantastic way to build your body. But should you choose casein or whey protein supplementation? Compare the two options and ensure that you take the supplement that builds the most muscle.

Which is the Best Supplement to Use?

In this edition of gym showdown, the nemeses are casein protein and whey protein. Protein contains the amino acids that are responsible for building muscle tissue, and these two contenders have what it takes to help turn you into a solid wall of muscle. The properties of these two proteins will be picked apart, and at the end, you will decide who wins.

Both casein and whey are great sources of protein.

Casein is a phosphoprotein and the principal protein in milk. Eighty percent of the protein found in milk is casein protein. The most astounding property of this protein is that it has the ability to form a clot or gel in the stomach. This gel is then slowly digested, releasing a constant stream of amino acids over a period of hours. The slow digesting properties of casein make it the optimal protein to take just before bed. This is because the nutrients will be continuously released into your body while you sleep, thereby helping you to avoid catabolism (the breakdown of muscle tissue).

A study conducted in the Netherlands revealed some interesting facts about casein protein. A two and one-half percent increase in casein protein consumption resulted in a thirty-three percent increase in satiety levels. It also raised metabolic rates during sleep and participants had lower amounts of overall levels of body fat. Protein casein can help you lose more fat and decrease your desire to eat while dieting.

A Massachusetts study showed that consumption of casein protein provided athletes with greater gains in strength than whey protein. This study lasted 12 weeks and participants were split into three groups. One group consumed a low-fat, low-calorie diet. The second group participated in weight training exercises and consumed casein protein.

The third group also performed resistance exercises, but consumed whey protein. Among the three groups, the amount of weight loss was identical (all participants lost 2.5 kilograms), but the group consuming casein protein doubled gains in strength in the legs, chest, and shoulders. These results were attributed to the anti-catabolic effects of casein protein.

In addition to being available as a protein supplement, you can get casein protein from foods like cottage cheese, yogurt, and milk.

Whey protein, like casein protein, is found in milk. This protein is a combination of proteins found in the liquid part of milk that gets separated when cheese is made. As opposed to casein protein, which can take up to 5 hours to digest, whey protein normally digests at the rate of 8 to 10 grams of protein per hour.

But the human body is an incredible machine and speeds up absorption rates according to need. After intense workouts, the body will slightly speed up the absorption process to be able to utilize the amino acids in whey protein. This makes whey protein a better choice after working out because your body wants to repair the slight muscle damage you caused in the gym to make you stronger and leaner.

Researchers in Australia decided to study the effects of whey protein on hunger levels. This study involved 28 obese men. The men were divided into groups and one group was given 50 grams of whey protein. The group that drank whey protein had much lower levels of ghrelin (the hunger hormone). Consuming whey protein over other beverages will suppress ghrelin resulting in greater body fat loss for you.

Stress levels were investigated in a study conducted in the Netherlands. Researchers placed 56 participants through various levels of stress and then gave some of them whey protein. At the end of the study, it was discovered that the group consuming whey protein had an elevated mood and fewer depression symptoms. This result was attributed to an increase in levels of serotonin in the brain.

Your immune system protects you from all kinds of illnesses. Canadian researchers sought a way to strengthen the immune system so they took a group of men and subjected them to strenuous aerobic activity. The researchers then measured the glutathione levels in these men and found that they were low.

Both casein and whey protein are tough contenders and it will be very difficult to choose between the two of them. The good part is you don’t have to choose between them. Choose casein protein or foods high in casein protein before going to bed or when you are dieting. Choose whey protein when you want a protein that digests quickly, helps fight stress and strengthens your immune system. In this instance, whey protein is the way to go.